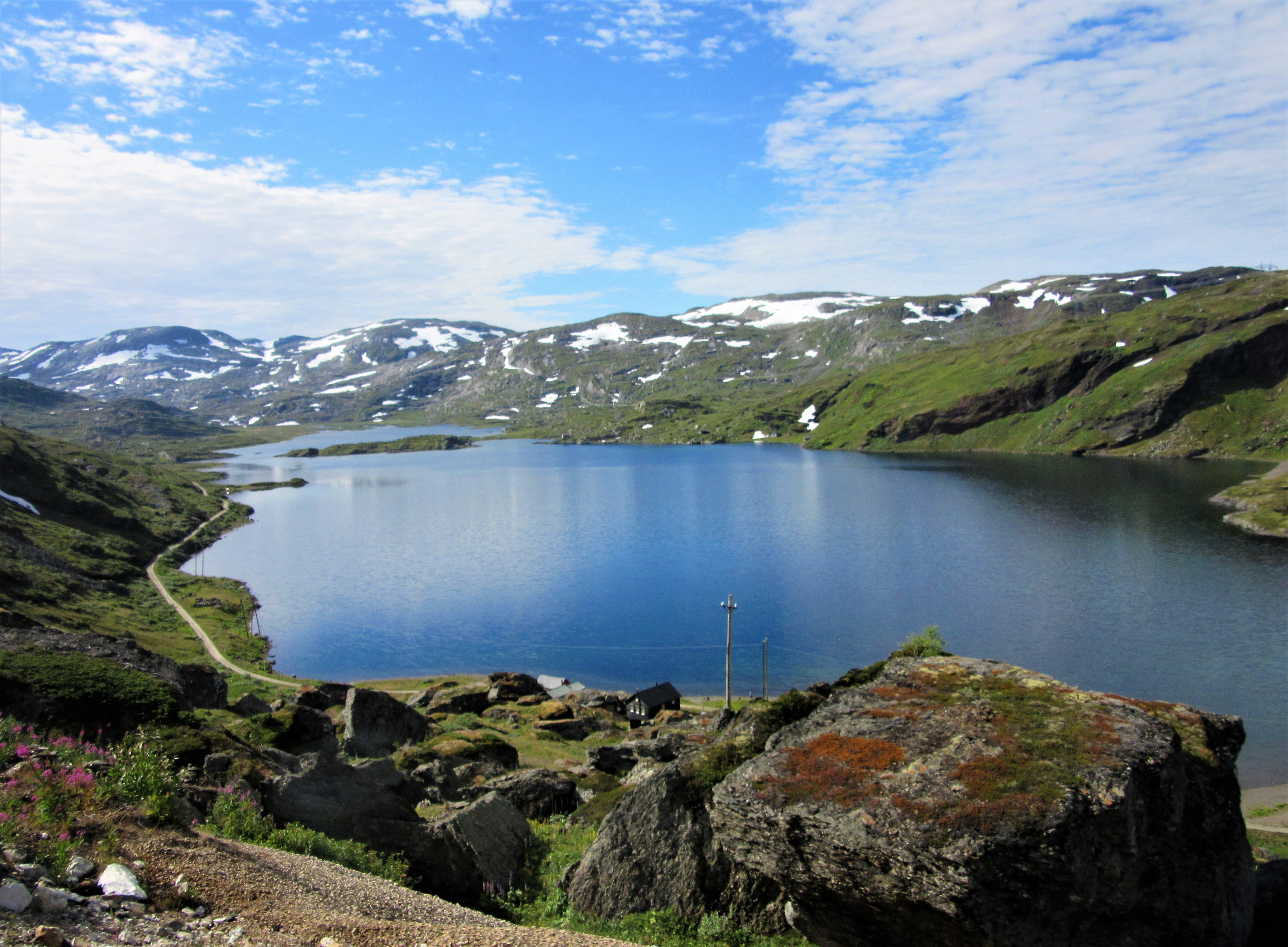 Scene after scene of discovery and beauty flashed in front of the train’s sizable windows as we traveled from Bergen to Oslo, Norway.  Each glimpse revealed a sight I’d never seen before – and will likely never see again. Even if I do, it won’t be the same as experiencing it for the first time.

An expansive lake with its clear, calm water sparkling in the sunlight popped into view soon after we began our trek in our cushioned and comfortable seats.  Rolling green hills provided the backdrop for a smattering of houses dotting that shoreline.

A serene scene, but…

When that first scenic view appeared, I admit I was frustrated – the “good” view was on the side of the train we weren’t seated on. What if all the “best” views for the entire journey were on that side?  What if we’d picked the less desirable place to be?  Straining to see more clearly and get photos of the beautiful scene on that side, I stretched back and forth, lifted my camera high and grumbled under my breath about where we were seated.

Consequently, I almost missed out when truly breath-taking landscapes showed up on my side.  Involuntarily, I gasped in delight at the landscape that filled my view.

“I think they’re getting all the best views,” complained two women on the opposite side of the train.

A rushing river ran alongside us, its water swirling into white bubbles as it rolled over rocks.  A barren, rugged cliffside rose behind it, only its upper ridges rimmed with narrow green tree lines as if the closer they got to the sky, the more they could grow.

As the ride continued it became evident that all of us had beauty surrounding us, and even when it was on the other side or in the distance, our eyes could still take in the wonder.

The vistas were too magnificent to fully capture on camera, but I still attempted the challenge. In reviewing several shots though, I discovered I was too far away from the train’s glass windows which resulted in reflections of me and others superimposing and messing up the scenes.

Like the images marring my captured visuals, we too can create flawed and spoiled experiences and memories.  When we hold ourselves at a distance from God and His blueprint for our life, then our demands, our will and our choices can imprint over His image and spoil the beauty He offers us.

He wants us to be like children with our faces pressing up to the glass waiting for Dad to arrive home again – and meanwhile fully enjoying the beauty in the world He’s created for us.

Most scenes had a treasure tucked inside them…a solitary boat on the lake, a lone house surrounded by mountains, a valley with river and road ribbons weaving their way across the landscape.  Some of those I intentionally captured; others revealed themselves later as I relived the journey via photographs and zoomed in on the scenes.  As time passes new discoveries may emerge, but others remain forever missed and unobserved as we speed through life too fast or neglect to pause and zoom in.

Bright sunshine illuminated our views as blue skies and puffy white clouds added to the Artist’s colorful palette of the day.  Then darkness surrounded us as we entered one of many tunnels we would encounter – spaces hollowed out to allow this train to traverse across the rugged terrain.  It seemed as if those dark, closed off places we were in were robbing us of the beauty outside.  Yet, the splendor of what we had previously experienced was still in us if we chose to focus and remember what we’d already seen.

Out we came then, back into the light, where we soon saw families with baby strollers and toddlers in tow, friends backpacking and lovers holding hands at one of the stops.  We passed a hotel from the 1800s where generations have experienced mountain getaways.  Suitcases being rolled.  Souvenirs being sold.

At stops along the way, people got on the train heading in the same direction and some departed.  As we climbed higher and higher on the route, snow-capped mountain peaks emerged and became more and more visible.

We could see the summits.

For since the creation of the world God’s invisible qualities—his eternal power and divine nature—have been clearly seen, being understood from what has been made, so that people are without excuse.

For although they knew God, they neither glorified him as God nor gave thanks to him, but their thinking became futile and their foolish hearts were darkened.

Although they claimed to be wise, they became fools and exchanged the glory of the immortal God for images made to look like a mortal human being and birds and animals and reptiles.  Romans 1:20-23 NIV

What is blocking or obstructing your view of God and the blessings He’s provided?

If you’re in a tunnel of darkness now, what scenes can you remember when God showed His beauty and faithfulness to you in the past?

Are you close enough to God to clearly see His handiwork and all its treasures or do you need to come in closer?

What images in your life are distorting or blurring how you focus on God and delight in Him?

Let us draw near to God with a sincere heart and with the full assurance that faith brings, having our hearts sprinkled to cleanse us from a guilty conscience and having our bodies washed with pure water. Let us hold unswervingly to the hope we profess, for he who promised is faithful.  Hebrews 10:22-23 NIV