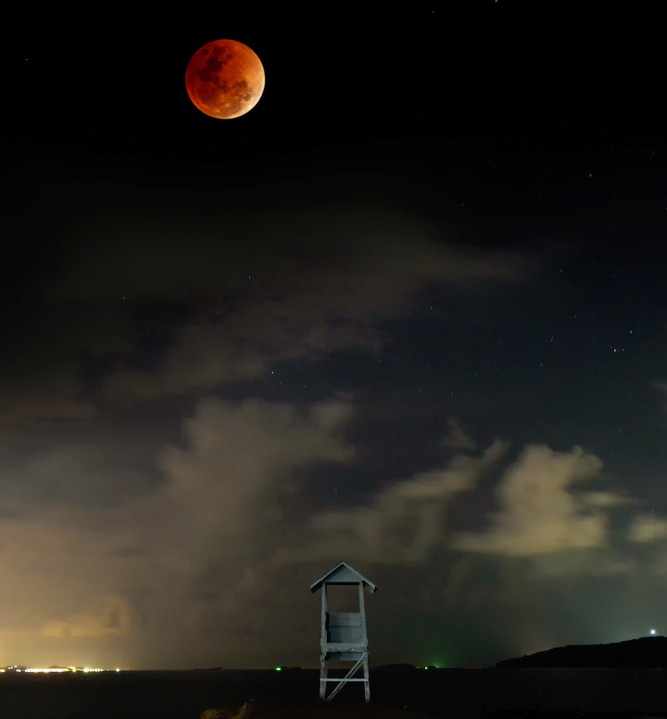 Minutes before midnight on a cold January evening, I drove alone to a nearby parking lot to experience an unobstructed view of the blood moon.  My eyes lifted upward.  Above, the orangish-red-colored moon seemed stamped in the sky’s blackness.  A few stars glittered brightly in the sky like silvery-white confetti cheering the event.

Reflexively, my breath drew in as I took in the wonder.

In that unlikely place – a big box store parking lot empty of its normal array of cars and kinetic activity – I stood still.

I admired the creation, but spoke the song in my soul to the Creator.

The artistry, beauty and intricacies of the lunar eclipse moved my heart and mind to stand in awe.  Ever so grateful to have experienced that beauty, I am even more thankful to know and trust in the Lord who created heaven and earth.

How incredible it must have been for those first humans to see the moon up close; to walk on its surface; and to view earth from more than 250,000 miles away!

Fifty years ago this week, three brave former military pilots turned astronauts soared skyward to accomplish something no one had even done before – execute a landing on the moon.  Two of them walked on the moon’s surface while the other, Michael Collins, piloted the module that would return them all safely home.  Throughout the country, men, women and children stared at their televisions as Neil Armstrong stepped first onto the moon’s surface and uttered: “One small step for (a) man; one giant leap for mankind.*”

Apollo 11’s journey is embedded in the memories of millions of Americans.

Three elements made that day even more memorable.

From coast to coast, mountains to prairies, urban skyscrapers to rural farms, Americans cheered the accomplishment of landing on the moon. Families gathered around TVs; radio broadcasts kept people on the go connected. Despite riots, protests and continuing civic unrest in 1968 and ’69 related to civil rights and Vietnam, Americans united to jointly celebrate something good, meaningful and purposeful.

Three daring astronauts let their courage strengthen them, their mission motivate them and their training prepare them.  Heroes for the time and for history, the Apollo 11 crewmembers stimulated young minds for exploration through science, the solar system, and space flight but they also encouraged adults who applauded their achievements.  Their actions showed Americans and others around the world what can be accomplished when individuals push back fear and push forward with a commitment to progress, the desire for discovery and the willingness to sacrifice self for a greater good if necessary.

Images of the moon’s rough, dimpled surface as well as the earth’s marbled blue, white and tan image in the distance captivated a nation.  What majesty!  What creativity!  What glory!

After the “Eagle” landed on the moon’s surface, Buzz Aldrin invited those listening to “contemplate for a moment the events of the past few hours and to give thanks in his own individual way.”  Then, in private worship and acknowledge of God, he took communion and silently read “I am the vine, you are the branches. Whoever remains in me, and I in him, will bear much fruit; for you can do nothing without me.”  John 15:5

Aldrin knew the One who created the heavens and the earth also gifts us with talents and abilities, and the famous astronaut chose to pause and give thanks!

Lord, our Lord, how majestic is your name in all the earth! You have set your glory in the heavens.

Through the praise of children and infants you have established a stronghold against your enemies, to silence the foe and the avenger.

When I consider your heavens, the work of your fingers, the moon and the stars, which you have set in place, what is mankind that you are mindful of them, human beings that you care for them?

You have made them a little lower than the angels and crowned them with glory and honor.

You made them rulers over the works of your hands; you put everything under their feet: all flocks and herds, and the animals of the wild, the birds in the sky, and the fish in the sea, that swim the paths of the seas.

Lord, our Lord, how majestic is your name in all the earth!  Psalm 8 NIV

Notes:  In January 2019, people in North America got a treat when the moon incurred a total eclipse.  This year’s blood moon also claimed the title of supermoon due to its close proximity to earth.  Sky gazers won’t catch another total eclipse until 2021, experts say, and it’s likely North Americans won’t be able to see a blood moon until 2022.

Neil Armstrong says his famous quote included the “a” before man, but it didn’t come through on the relay.  While recordings don’t indicate the presence of the extra word, the intent is understood, and some evidence exists that Armstrong did indeed utter something prior to “man.”

In a 1970 Guideposts article, Buzz Aldrin recounted his choice to take communion when he landed on the moon and why.  You’ll want to read this!