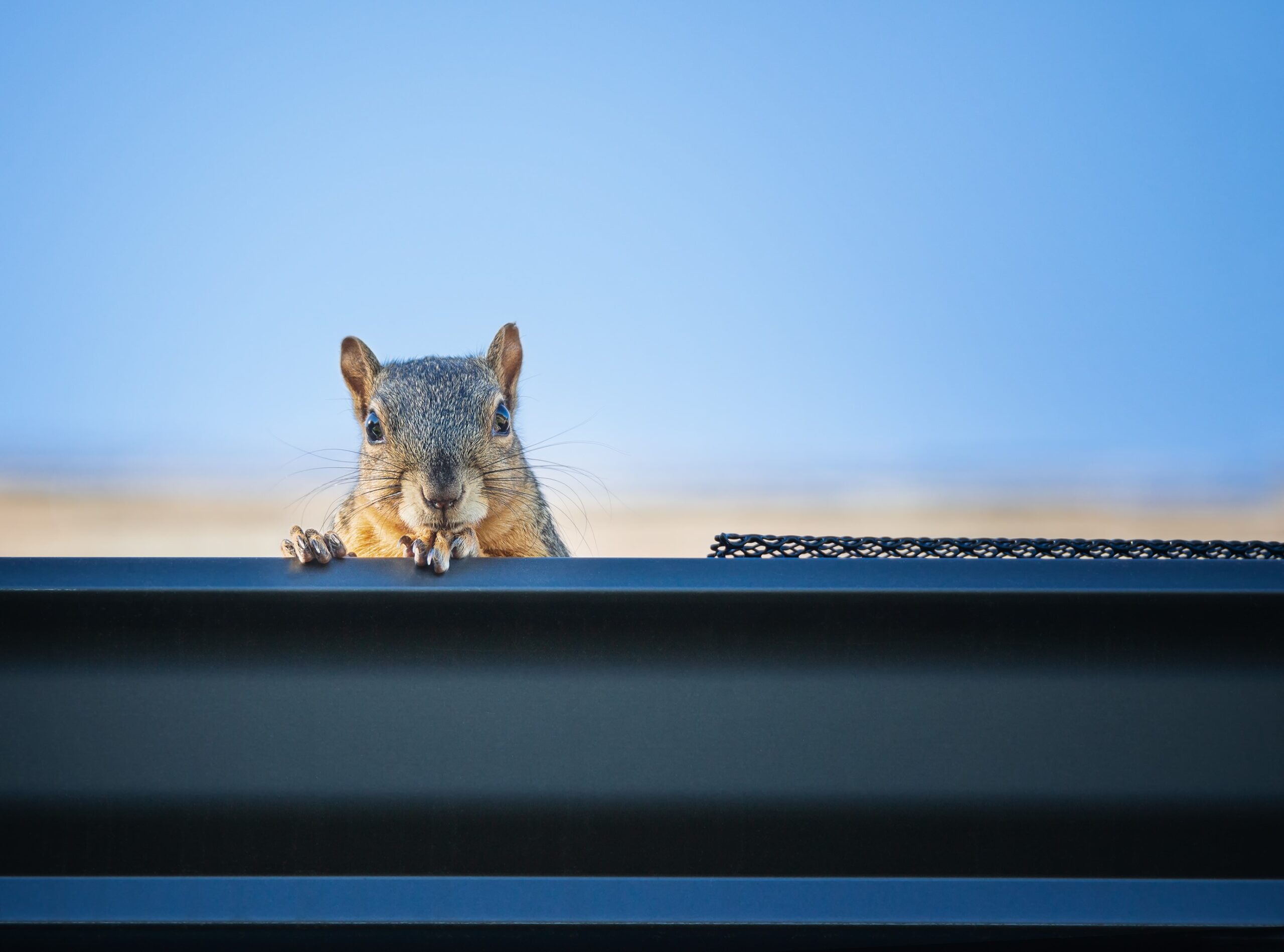 “Thump.”  The loud noise in the sunroom sounded as if a branch or a bird slammed into a window, or a mechanical device turned on, but as it happened again and again, the squirrel became the suspect.

A couple of weeks prior, a squirrel feverishly fighting to get leaves off a nearby branch appeared entertaining.  I watched and filmed it with glee, sharing with friends on social media to amuse them.

Sin is like that.  It entertains.  Flirts.  Causes us to laugh.  Often seems fun and harmless.  Then, before we know it, it’s gained access by pushing past our defenses and finding a place to settle in and homestead.  Or it invites us to set up a home base in forbidden areas – where we come back.

Such was the case with the squirrel.

Flattening itself to slither in, the feisty, furry animal pushed past the end barrier of the gutter guard to take up residence in our sunporch gutter.

Excruciating cacophony erupted.  With the metal gutter, it sounded like a heavy metal band rehearsal as sound reverberated throughout the sunroom.

Contrary to squirrel logic, gutter guards do not mean a covered condo for critters.

Resourceful as it was, the little rascal had gnawed the roofing shingle to gain clearance, and was willing to suffer pain to squeeze in as it left lots of squirrel hair on the metal.

In the midst of a pouring rain, I recently saw the squirrel huddled, shivering on a branch, leaning securely against the strong, river birch tree trunk. As the rain turned heavier, the squirrel gave up its spot, leaping from the branch to the rooftop, bounding across the roof and, in a flash, all I saw was the backend and tail as it pushed past the barrier into the prohibited place.

Yet just a couple of days before, we heard it bashing and thrashing about in that enclosed gutter, as if fighting to get out, claws clamoring and clanging on the metal.

Despite having to sneak and slither in…

it chose to go back.

Even though it was closed away from the light, almost trapped inside instead of being free, it still returned to the covered gutter instead of relishing the full freedom found in the Creator’s open landscape.

In Christ, we have strength to lean on in the storms, yet sometimes we abandon that security to seek our own solutions, an escape, or an offering we think we’ll enjoy more at the moment.

We had a cage installed that allows the squirrel to come out, but not to return. Interestingly, the squirrel keeps trying to go back. The allure of where it’s not supposed to go still entices although it lives surrounded by beautiful trees, bountiful food and light.

God has provided a way through Christ for us to come out of sin and be redeemed, yet at times we try to go back – in times of storms, success, sensory searching or social pressures.

What about right now?

Are we causing racket with sinful attitudes and actions?

In the recent storms of life, have we abandoned the security of resting in God’s strength to do what we want?

Do the desires of our heart – and the actions we’re taking – keep us surrounded and nourished by the wonders God created for us to enjoy, or are we pushing and clawing and creating chaos in our minds and the lives of others?

You, my brothers and sisters, were called to be free. But do not use your freedom to indulge the flesh; rather, serve one another humbly in love. For the entire law is fulfilled in keeping this one command: “Love your neighbor as yourself.” If you bite and devour each other, watch out or you will be destroyed by each other.

But the fruit of the Spirit is love, joy, peace, forbearance, kindness, goodness, faithfulness, gentleness and self-control. Against such things there is no law. Those who belong to Christ Jesus have crucified the flesh with its passions and desires. Since we live by the Spirit, let us keep in step with the Spirit. Let us not become conceited, provoking and envying each other. Galatians 5:13-26 NIV

You were taught, with regard to your former way of life, to put off your old self, which is being corrupted by its deceitful desires; to be made new in the attitude of your minds; and to put on the new self, created to be like God in true righteousness and holiness.